That’s a Lot of Work for a Free Banana: My NYC Marathon Story 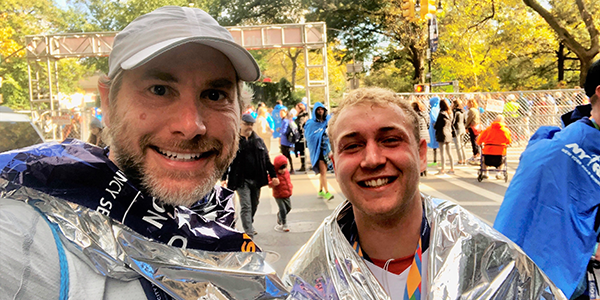 In Fall 2019 I ran the New York City Marathon on behalf of the Lee Pesky Learning Center, the only non-profit in Idaho to put together a charity team.

I don’t work in education but in public radio. Three years ago, I moved to Idaho from Texas. When I arrived, I had foot surgery. Luckily, I recovered to take advantage of the running paths along the Boise River Greenbelt and in the foothills above the city.

When I signed up with LPLC, my first goal was to raise the money. I collected more than $3,500 from my family and friends. My supervisor at work asked me cheekily, “Hey, if you don’t cross the finish line, do I get my money back?”

My second goal was to properly train for the marathon and really take it on as a race. In my 50 years on this planet, I have run 10 marathons. Now, after foot surgery, I wanted to run my fastest marathon. I even bought a book called “Run Less, Run Faster.” That title spoke to me.

In the months ahead of the November race, I trained very hard, waking up in the dark for track intervals, making sure I was hitting my prescribed training splits at distance, and squeezing in runs during family vacations. Like any middle-aged runner, there were always aches and pains, but luckily they were kept to a minimum.

In the weeks before the race, I had some special inspiration: visiting with an old high school running friend in Boulder, receiving an NYC marathon poncho from my training partner, and watching as my brother-in-law – who had open heart surgery at age 40 – completed the Chicago marathon.

In the days before the race, I dialed up a family friend who was one of the few to run the very first New York Marathon in 1970. Back then, the city didn’t shut down the streets. They just ran circles around Central Park, he told me.

On Halloween, my sister Maureen flew in from Chicago to Boise to watch the kids, so my wife Katherine and I could make the long trip East. We arrived in Manhattan to perfect weekend weather.

The night before the race, I enjoyed a home-cooked meal in a large Chelsea apartment with a table full of old friends from Texas. I was ready.

Running is not a public activity for me. I don’t talk or write much about it. I’m often running in the dark through the Boise foothills. Over the past few years, I have quietly driven into Utah or flown to Arizona to participate in races that I’ve rarely shared with others.

This would be different. I called every one of my family members and all my close friends to ask them to donate to our charity team. I posted it on social media. The fact that I was going to run the New York Marathon was very public.

So is the race itself. Not only would there be 52,000 runners, but tens of thousands of intense New Yorkers cheering along the route. These wouldn’t be polite golf claps but cowbells and full-throated yelling. It didn’t matter if it was only mile 5. They will be screaming at you to RUN FOR GODSAKES.

In the starting tent on the morning of the race, I met the rest of the team from the Lee Pesky Learning Center. I lined up in my corral with a 20-year-old Boisean named Jack. His mother Evelyn runs the Center. Jack attended to Riverstone Academy and was now a student at Brown University in Rhode Island, where he serves in military ROTC and is pursuing international studies.

He was eager and upbeat, but I wrote him off. He had a chest cold, he was undertrained, and it was his first marathon. Good luck, kid. You’ll need it.

Three decades his senior, though, I took pity and gave him some encouraging advice. As we inched toward the starting line, I shook his hand and wished him well. I didn’t expect to see him again in the maddening throngs. The starting gun went off.

I went out hard, determined to do a sub-7:40 pace through the two-thirds of the marathon and then hold onto that during the late-race fade. I was hoping, for the first time ever, to avoid getting leg cramps that always plagued me in the final marathon miles.

You see a lot of clever signs along a marathon route. They are especially funny to those who are deliriously tired. My favorite, which this New York Times writer also noted, was one that read, “That’s a Lot of Work for a Free Banana.”

As you may know, the NYC Marathon goes through five New York boroughs, but it mostly runs through Brooklyn and Manhattan. It’s only in Staten Island and the Bronx for a very short time. A man in the Bronx was holding two signs. The sign in his right hand read, “Welcome To The Bronx.” The sign in his left hand read. “Now Get The Hell Out.”

I ran alone. But along the streets of Brooklyn I kept seeing Jack. First he was on my right shoulder. Then he was on my left shoulder. When I ate something, he ate something. When I went through water stations, he went in right behind me. At some point it became clear: Jack and I are running together.

As I said, one problem I haven’t solved, even after 10 marathons, is getting a seizing calf cramp in the later miles. Some say its electrolytes, others say its genetics. Maybe I’m under-trained for speed-at-distance? The experts at Saint Luke’s hospital even checked to see if it was misalignment in my running form.

I got the first muscle spasm too early, at mile 13 and told Jack casually, “Hey, if I suddenly disappear, it’s because I had to stop and stretch. No big deal.”

But over miles 13-16, the leg cramps kept bouncing around my legs like little electrical bursts. I decided to ignore them. Moreover, my pride made me hide this from Jack. I was the veteran. When my leg seized up, I would stifle a gasp. Or act like I was bouncing on one leg on purpose.

Finally, at mile 17, I yelled ARRRGGHH or maybe it was ACKKCKKK and grabbed my calf. A severe muscle spasm. Jack heard me clearly this time and turned around with concern. I slowed down and said. “Well, I guess that’s it. Go ahead without me, Jack, and have a good run.”

Jack slowed though and said to me plaintively, “But…we’ve been through so much together.”

He was right. We had been through a lot together. We had just matched each other stride-for-stride across two-thirds of one of the biggest footraces in the nation. Me with my experience and training. He with his youth and drive.

We were now a team. I told my head to ignore the leg spasms and to just shorten my stride. In the last third of the race, I couldn’t tell if he was carrying me or if I was carrying him. And maybe it didn’t even matter. Jack and I would go on to finish the whole race together, never once stopping.

In the final mile through Central Park, I saw my wife Katherine in the crowd. She had to yell my name several times to be heard above the roar. This gave me a burst of speed.

Churning to the finish though, I realized I no longer saw Jack on my shoulder, so I pulled over to wait for him. I let other runners pass until I saw him again. Because…we’ve been through so much together, right?

Jack and I crossed the line. Finally done. We embraced. We were given a medal, a heat wrap, and a free banana. We wandered out of Central Park and parted ways. We had just ran 3:29, which is good for both a 50-year-old and for a first-time marathoner.

Later, when I got home to Boise, I saw that my kids had posted that 3:29 time on the fridge. Way to go, Dad.

It’s more than a month later now and the hub-hub from the New York Marathon has died down. I’ll go back to quietly running alone now. I’ve got my head-lamp charged and I’ll head out while everyone is sleeping.

The energy to fundraise and train for New York demanded a lot of attention from my family, and they advised me to take a break from racing. I get it. They scold me when I look at upcoming races online. Dad, this winter we have other plans.

Yes, they are right. But I have a confession. I haven’t told anyone yet but I guess I’m writing it down now. I signed up for the Los Angeles Marathon in March.

As Reported by CBS2, ISDE Approves Course Fulfilling Dyslexia Training for Educators
September 22, 2022
Recent posts
Have news to share with us? Get in touch!
Go to Top